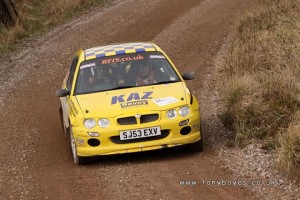 Round 2 of the Btrda Rally Championship, took place in the beautiful hills of the Lake District last weekend  with 101 crews greeted by surprisingly warm weather and no rain.

The stages around Cockermouth and in Grizedale forest were in fantastic condition, and with the 1400’s running first on the road the early 7am calm of the lakes was soon shattered  by the sound of screaming engines.

Marcel was running the new Maxsport tyre he hopes to use all season, again a soft compound for the morning proved a good choice with a steady first stage to get used to the feeling and limits of the tyre.

With no major dramas on the first stage they started to up the pace on the next few stages and felt comfortable with the car and grip levels. By service they were the leading Mg and up to 6th in the 1400’s after the demise of rally leader matt smith and also Clive Anstey.

The battle for the 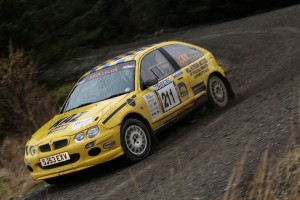 mid top 10 was frugal with Marcel swapping times with Dave Brick and John Hardman all afternoon. At the finish Marcel was in  6th place out of the registered crews, only 7 seconds off 4th place after 43 miles of gravel rallying!

Marcel was very happy with the new tyre choice and was the only person in the top 10 using a remoulded tyre. The car was faultless and with a few tweeks and the build of confidence Marcel is steadily getting back to his old pace at the sharp end of the 1400 field.

The next event is the long trek to the  Somerset StagesRally in Minehead on the 12th April and the car is currently being re prepared for round 3.

Camera footage taken on the event has given Marcel the opportunity to analyse his driving for the first time ever and it has shown Marcel where he is losing time and what can be done to improve on his pace (thanks to vision-tek.co.uk for the in car camera).