Result: 1st overall in the MG Challenge and 4th Overall in the 1400 Championship Round 4 of the BTRDA Rally Championship was held in the picturesque heart of Mid Wales last weekend with the hot weather creating  a dusty and very slippery event .

Stage 1 was very slippy with the loose gravel making Marcel work extra hard to keep the car on the stage. They punctured a rear tyre in the stage after sliding into a ditch (above picture) but kept going and got through with no other damage and only a little time lost. 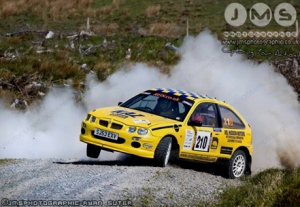 With no spare tyre until service they took extra care through the next 2 stages not risking another puncture or getting too close to the dig drops at the edge of the hilly tracks.

The 40 Minute service in Dolgellau was enough to give the car a good once over and pick up a spare wheel, the couple were now ready to tackle the 5 afternoon stages.

A push on the afternoon stages saw them climbing up the top 10 leader board with a very close battle ensuing behind the 1400 leader Matt Smith.

Stage 7 was to be problematic as they were catching the car in front having to drive in thick dust and slow down before being able to pass it on a hairpin, nearly at the end of the stage.

They eventually finished 4th of the registered  1400 crews, just missing out on a podium place by 7 seconds. They now move into the leading position in the overall 1400 Championship, as they are one of the only crews with 4 scores from 4 rounds!

The next event is the Dukeries Rally in Sherwood forest on June 8th.

TV Coverage of the will be on the 30th May at 9pm on MOTORS TV, when we should feature a few times.